A Patent Attorney in a Growing Field

Ashley Marie Sutherland ’23 has transformed herself from a gardener and grant writer to an aspiring patent attorney—with a hefty dose of entrepreneurship in between. Her family startup, HEIRS farm--a 1,200-square-foot indoor vertical hydroponic farm, focusing on bringing culturally relevant microgreens to Chicago's south side--won the top prize of $30,000 at the 2021 Pitch@IllinoisTech competition.

Ashley Marie Sutherland ’23 has transformed herself from a gardener and grant writer to an aspiring patent attorney—with a hefty dose of entrepreneurship in between.

With an award-winning startup under her belt, Sutherland hopes to parlay her background in biology and community work to the “agritech” field, and get plenty of practice in patent law along the way.

She already has a head start in agritech: Her family startup, HEIRS farm—which won the top prize of $30,000 at the 2021 Pitch@IllinoisTech competition—is a 1,200-square-foot indoor vertical hydroponic farm, focusing on bringing culturally relevant microgreens, including diasporic crops, to Chicago’s South Side neighborhoods.

When she graduates from Chicago-Kent College of Law in 2023, Sutherland hopes to apply her specialization in intellectual property and patent law toward her current business interests, reaching out to farmers and agricultural businesses within her network.

“There’s a lot of crossover. Agritech and agriculture has a lot of equipment and new technology, new strains and materials, and a lot of food engineering. That is patents all day long,” Sutherland says. “It’s ripe.”

The idea for the farm took root when Sutherland and her husband started a home garden in 2020, right after the COVID-19 pandemic hit. Exasperated by the lack of options, the couple started gardening in a community space, and “we grew so much we couldn’t eat all of it, so we started feeding five other houses. Then we said, ‘We can do this all year round,’” Sutherland says. The two had prior experience in urban community gardening while working in California.

“I’m not able to cook a lot of the foods that are culturally relevant to me,” Sutherland adds. “Even something simple:  You have to travel far and wide to find basil, it’s not readily available around me.”

HEIRS’s crops, which she’s pitching to area restaurants, now include microgreens such as, amaranth, ethopian basil, kohlrabi, chives, kale, sunflower, peas, and radish: produce she believes her community has a strong desire for.

After growing up in the southern Chicago suburb of Chicago Heights, Illinois, Sutherland—the daughter of a police officer and a sheriff deputy—received her bachelor of science degree in biomedical science from Southern Illinois University Carbondale.

But instead of going to medical school, she instead decided to earn her master’s degree in public health from Benedictine University in Lisle, Illinois.

“I started on legislation and policy and how it affects things on a macro level…how health determinants can be influenced by health policy,” Sutherland says. “I don’t think I wanted to do medicine, I wanted to go into policy. I wanted to circumvent and overcome issues and really enact change.”

After getting married, Sutherland moved to California with her husband. It was a struggle to find a job, with many telling her she was overqualified. So she took an internship with EnrichLA, a nonprofit that built gardens for public schools and public housing communities.

With a laugh, Sutherland adds, “I’ve been a kid that really likes the outside and playing in the dirt all the time. I’ve never known a time when I wasn’t outside and being dirty. I’d collect bugs and my mom would be pissed.”

She literally dug in, maintaining five community gardens—including two she built herself.

“I learned all things garden, all stages of plants, pollinators. I gardened every day for three months, and I was completely obsessed,” she says. “I learned in a very short time how you can grow all this stuff and get kids’ perception of their environment to change.”

Eventually, Sutherland was hired on to help with programming, grants, and community organizing. She worked with nonprofits in nutritional programming, kids programming, and garden programming.

But after a year, Sutherland returned to Chicago, where her family would have a better support structure. She started a consulting company, working with municipalities and nonprofits on grant strategization. And she readied herself for the next step.

“I’d always had law school in the back of my brain since getting into lobbying and nonprofits,” she says. “I resisted it for years. But now that I was back home, I thought, ‘why don’t you just take the LSAT?’”

She looked into local part-time programs, and was impressed with Chicago-Kent’s. “It was one of the best in Chicago, with a very strong legal writing program,” she says.

She liked lobbying. She liked gardening and the environment, with her hefty background in biology. And she had a “strong love for hard science and complexity.”

So she took a patent course. And something clicked.

“I really felt like I used all of my skills when analyzing cases, and I kept going further, and it was a good marriage of everything,” Sutherland says. “I’m hoping to use all these skills, and harvest my relationship with local farmers, to work with local Chicago and specifically BIPOC communities that are working with those (agritech) technologies. It’s an emerging field.” 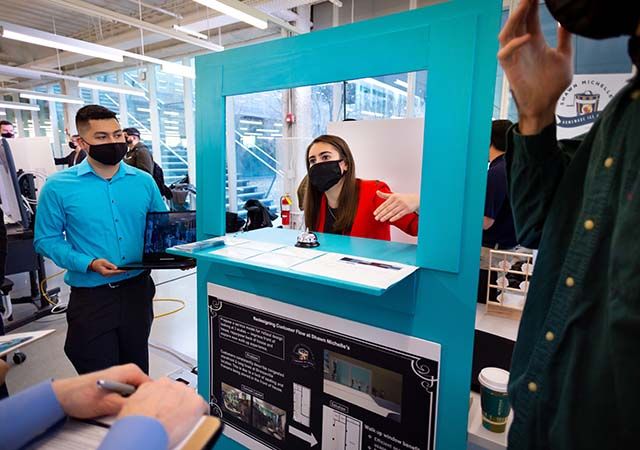 The Call to be a Defender

Getting an Early Start on Law School