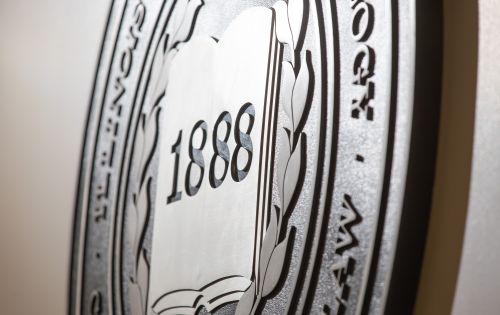 The second oldest law school in the state of Illinois, Chicago-Kent has a history marked by innovation and excellence. Recognizing that equal justice before the law could only be attained through equal access to legal education, Judge Thomas Moran and Judge Joseph Bailey founded the Chicago Evening Law Classes to offer evening instruction to working men and women. Originally held in the judges’ chambers, the classes quickly moved to a more formal setting. A year later, in 1888, Chicago College of Law was incorporated. The first minority student and the first woman student graduated in 1895.

During this same period, Marshall D. Ewell, former dean of Northwestern University Law School, returned to academia to found Kent College of Law, named after Chancellor James Kent, author of Commentaries on American Law, a classic in early American legal scholarship. Ewell’s pioneering treatment of jurisprudence as an academic discipline paved the way for the future of legal education. Within 10 years Chicago College of Law and Kent College of Law merged to form Chicago-Kent College of Law.

In 1969, Chicago-Kent merged with the Illinois Institute of Technology, recognizing the need for a partnership between legal education and science and technology to prepare students properly to face the challenges of a complex society. Since the merger the law school’s reputation for developing creative approaches to the traditional tasks of legal education has increased dramatically in scope and depth.

For a list of more of Chicago-Kent’s groundbreaking achievements, visit our Chicago-Kent Firsts page.

Emma Baumann graduates from Chicago College of Law, becoming the first woman to earn a law degree from the school.

Ida Platt graduates with honors from Chicago College of Law, and soon becomes the first black woman admitted to the Illinois bar—and only the second woman of color admitted to practice law in the United States. She later helped establish the Cook County Bar Association, the nation’s oldest African-American bar association.

Marshall D. Ewell founds Kent College of Law, named for Chancellor James B. Kent, author of the influential Commentaries on American Law. Ewell serves as the school’s first and only dean.

Chicago-Kent College of Law moves to rented space in the 116 North Michigan Avenue building, where it remains for the next 12 years.

The Chicago Kent Review begins continuous publication under the direction of Dean Webster H. Burke. Several years later, it adopted its current name, the Chicago-Kent Law Review. The publication began as the Anthenaeum Law Bulletin, one of the nation’s first law reviews.

Chicago-Kent purchases the building at 10 North Franklin Street, which serves as its home for the next 50 years.

Chicago-Kent College of Law earns certification from the Section of Legal Education of the American Bar Association.

Chicago-Kent College of Law becomes a member of the Association of American Law Schools.

Chicago-Kent merges with Illinois Institute of Technology, becoming one of the few U.S. law schools affiliated with a technical university.

Chicago-Kent moves from 10 North Franklin Street to 77 South Wacker Drive, and starts the nation’s first in-house, fee-generating law school clinic in which a faculty of practicing lawyers engage students to work on real cases under the discipline of actual practice conditions. In a typical year, clinical professors and students handle hundreds of cases in employment, criminal, health, and tax law.

Chicago-Kent pioneers the three-year legal research and writing program, which is now emulated at law schools across the nation. To ensure personal attention, most writing classes have fewer than 30 students. The Moot Court Honor Society is founded to provide practical skills training in the foundations of appellate advocacy: brief writing and oral argument. Chicago-Kent fields a number of moot court teams that compete at the national and international levels in a variety of subject areas.

Chicago-Kent establishes a chapter of the Order of the Coif, an honorary scholastic society that encourages excellence in legal education by fostering a spirit of careful study and recognizing students, lawyers, judges, and teachers for their scholarly or professional accomplishments.

Chicago-Kent opens the “law school of the future” at 565 West Adams Street in Chicago’s West Loop neighborhood, making the state-of-the-art building its new and current home. It was renamed the Conviser Law Center in 2020.

Chicago-Kent wins both the National Moot Court Competition and National Trial Competition, making it the first school to win both competitions in the same year.